SEO shortcuts to a top ranking 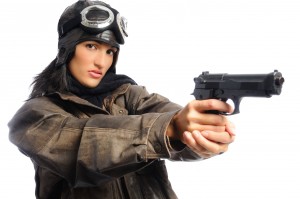 Three guys are in an alleyway. They have masks, they have guns. They are about to rob a bank. They have a plan that they have worked on for months. One will get the cash, the other covers the room and the third watches the door. Let’s call it GoogleBank.

So they bust in there, take the money from GoogleBank that had been deposited by all the hard-working customers that had saved week after week and retreat to count their loot. They do this time after time, raiding YahooBank and BingBank as well but like most bank robbers, they don’t know when they’ve gone too far, end up getting caught, lose everything and spend a long time in jail. The customer’s money was insured, so they get it back and the banks go back to normal.

The robbers almost always spend a long time paying for their short-cut to wealth.

When you think about it, the whole idea of an ” SEO short-cut” is that you’re doing something you know the search engine won’t like to try and cheat your way into the top rankings. Even if it works for now, it’s only a matter of time before you get caught and pay the price.

Often, when I talk to a client about search engine optimisation for their website, our discussion will come around to the client saying something like, “Isn’t there an easier way?” or “Can’t we do it quicker?”. “Yes of course you can but you probably won’t like where it ends up!”.  SEO short cuts can be a fast track to ranking disaster. If you consider what a short cut really is, it’s obvious!

Even if you find a clever new short cut that works and gets you to #1, it won’t last. Other people will wonder how you got to #1 so quickly, copy you, the search engines will figure out what you’re all doing and change their algorithms. If you don’t get a manual penalty, the algorithm change could significantly damage your search engine rankings until you are able to alter your plans and recover. In some cases, if the SEO work you did was on other websites not in your control, it could take months to un-do the damage, if you can at all.

“There are no shortcuts…”
Matt Cutts
Google Senior Engineer

“If you think there’s a shortcut to get there, I can almost guarantee you there’s not. It takes hard work.”
Duane Forrester
Senior Project Manager
Bing.com Webmaster Project

People who try to cheat search engines always get caught – eventually. Instead of spending all that time trying to recover from your Google penalty or Yahoo ban, do it right the first time. You will have longer-lasting, better quality results and less stress. Build your website the way that you would want a website to work for you if you were the customer.